FACT CHECK: HAVE YOU SEEN THIS AD?

Following is a FACT CHECK from the Collins for Senator campaign:

Have you seen this ad? 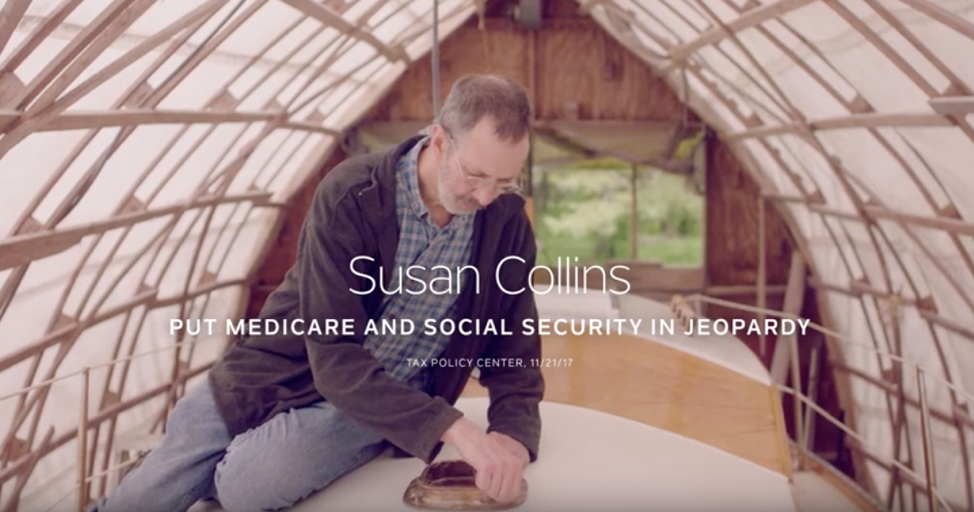 It's being run in Maine by a dark money group called "Maine Momentum." The group is run by two political operatives, including Sara Gideon’s former communications director, and is rumored to be funded by out-of-state billionaires – but they refuse to disclose who's behind it.

And it's false. The Washington Post fact checkers gave the ad "3 Pinocchios," rating it "mostly false." Click here to read their review >>

The ad makes the deceptive claim that Senator Collins' support of tax reform "put Medicare and Social Security in jeopardy."

Prior to the passage of the tax cut on December 20, 2017, some had expressed concerns that procedural budget rules would trigger an automatic $25 billion cut in Medicare (Social Security was exempt from these rules).  This ad cites an 11/21/17 article that reflected concerns about the impact on Medicare.

Here’s a critical piece of information the ad intentionally fails to point out:  About a month after the cited article was written, Senator Collins fixed this problem by ensuring the passage of a bill that specifically protected Medicare from these automatic cuts.

Senator Collins’ motion to protect Medicare passed the Senate 91-8.  AARP praised the effort in a December 2017 article titled "Medicare Spared From Budget Cuts in 2018": "Congress has acted to prevent mandatory funding cuts to Medicare . . . as a result of the new tax overhaul legislation."

Senator Collins said at the time her motion passed that “It has been deeply disturbing to me to see seniors frightened about the possibility that $25 billion cut in Medicare . . . would be automatically triggered.”  Now this dark money group is trying to scare seniors about this issue once again.

A similar false line of attack was recently debunked by the Washington Post’s Fact Checkers. In a Fact Checker Analysis from July 2019, titled “Is Trump cutting Medicare to give tax breaks to billionaires?,” the Post gave the claim 4 Pinocchios, the worst possible rating, saying, “The campaign season has barely begun, but there’s little excuse for this line of attack.”

Susan Collins has taken $0 from corporate donors. Why? Because it is against federal election law for candidates to take money from corporations.

But this is how dark money groups like “Maine Momentum” work. They funnel money from unknown, out-of-state sources into Maine and they deceive voters with a reckless disregard for the truth. It's not surprising that allies of Sara Gideon, who herself admitted to federal campaign finance violations involving straw donations and corporate money last week, would play these kinds of dark money games.

Maine Momentum (which is also known as “The 16 Counties Coalition”) is one of many groups already targeting Senator Collins with false advertisements. We will continue to identify these false ads as they run.