Families find lots to do Friday at Wilton Blueberry Festival 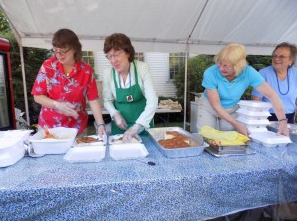 Families wishing to experience everything available Friday, August 2 at the 37th Annual Wilton Blueberry Festival had to plan ahead with events scheduled in several locations around town.

WILTON — This western Maine town was a beehive of activity Friday, August 2, during the 37th Annual Wilton Blueberry Festival.

During the morning people made their way along Main Street. They stopped to check out the wares offered by the many vendors or visited church sales. The lack of blueberries this year didn’t seem to make a difference to attendees. There were plenty of baked goods featuring blueberries to purchase as many freezers had been stocked with the sweet fruit last year.

Later, demonstrations were given by the Western Maine Blacksmith Association and the Wilton Historical Society was open for tours.

Kineowatha park had a variety of fun, family things to do. Calvary Hill Baptist Church had numerous activities set up. Children entering the area were greeted by Haley Sheehan dressed in a Tootsie Roll costume and Grace Glueck dressed as Queen Esther who gave everyone a treat. They were part of a group from Blueberry Mountain Bible Camp (BMBC) who came to help out.

The slip ‘n slide was one of the most popular activities. Corrie Hinckley of Avon was there with her children Kiana and Rylee Hinckley. The two girls slid down the soap slicked slide then quickly made their way back to the top for another wet trip down.

“We try to come every year,” Corrie said.

Kora Lee Flagg of Livermore Falls and Madison Martin of Jay were seen at the bracelet making table in the craft tent. One braided embroidery floss while the other threaded beads on a string.

“We’re best friends at school. We come every year.

Lea Dippner of Pennsylvania can be seen through the opening of the Water Walk, a new event at the Wilton Blueberry Festival this year. Her brother Jackson Dippner is in the wheel with her. Livermore Falls Advertiser photo by Pam Harnden

“The water slide is my favorite activity,” Kora Lee said.

BMBC members Benaiah Said and Katherine Farrar were kept busy recreating pictures at the face painting tent. A cupcake was chosen by Lili Frechette of Wilton.

Children could also take their turn at the fishing pool, attempt to make their way through a maze outlined with bright blue tape or complete an obstacle course.

Elsewhere in the park, the Wilton Recreation Dept. raised money with a dunk tank. Children paid a fee to attempt to send Wilton police officer Kevin Lemay into the tank of water. There was a long line of youngsters waiting their turn. Several children were successful in a short amount of time.

New this year was the Water Walk. Similar to a giant hamster wheel made of plastic that floated on a tank filled with water, two people could crawl inside and roll around inside.

Kristina Dippner of Lancaster, Pennsylvania said, “Doesn’t it just make you want to get in there?”

Her children Lea and Jackson were in the wheel at the time. Dippner’s family ran Hayden Brothers Shoes and she was visiting for the summer.

Shortly afterwards Dippner called her children to come out.

At the Wilson Lake boat launch, Friends of Wilson Lake members gave free boat rides. This is FOWL’s 30th year and children were given captain’s hats to celebrate.

Free fire truck rides were provided by crews from the Wilton and East Dixfield Fire Departments.

Later Friday afternoon U.S. Senator Susan Collins – (R) stopped by the chicken barbecue at the Wilton Congregational Church. Ladies from that church started the blueberry themed fundraiser and barbecue that has since become a larger event organized by Shannon Chase Smith.

Collins took her place in the serving line, placing a roll in each take out container.

“I bet it’s been a long time since you worked on an assembly line,” Dawn Girardin said.

"You’d be surprised!” Collins replied. “The chicken smells wonderful. I thought I’d be working the grill. This is much easier, much cooler.”

Later Collins said, “This is a great festival as always. I enjoy visiting festivals and parades. It’s what makes Maine so special. They bring us together as a community.”