The group running the ads, Maine Momentum, is classified for tax purposes as an educational nonprofit. As such, its donors are not subject to disclosure. While the group is not permitted to openly electioneer for a candidate, it is led by former Democratic operatives. In fact, one of its executives was recently employed by one of the Democrats running against Collins. 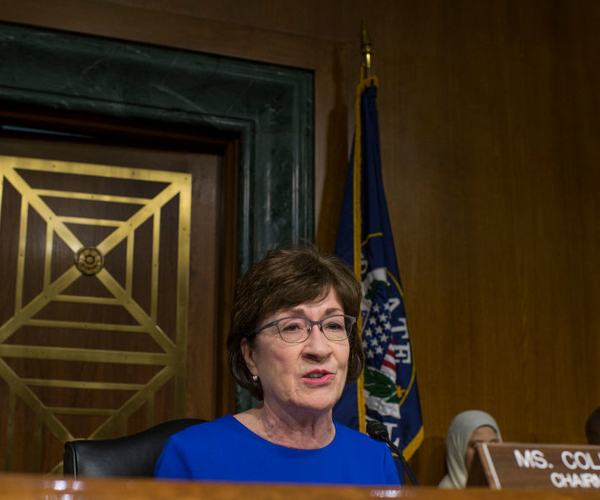 The group running the ads, Maine Momentum, is classified for tax purposes as an educational nonprofit. As such, its donors are not subject to disclosure.

While the group is not permitted to openly electioneer for a candidate, it is led by former Democratic operatives. In fact, one of its executives was recently employed by one of the Democrats running against Collins.

According to Advertising Analytics, a firm that tracks political advertising, Maine Momentum has spent over $716,000 in Maine to "educate" voters on the 2020 senatorial race. Critics say the group's primary purpose appears to be "educating" Maine voters to oppose Collins.

The latest anti-Collins blitz looks like a variation on the old "Medi-scare" tactic of suggesting to voters any Republican must secretly oppose, or would somehow wish to weaken, the social safety net of Medicare and Social Security.

Weaponizing the Trump tax cuts to attack Collins might seem unlikely. After all, by some estimates those tax reductions put $1,700 back in the pockets of a typical couple making $60,000 a year and raising two children.

The attack ads, however, focus on how the $1.5 trillion tax cut was funded.

The Senate Budget Committee projected a reduction in Medicare spending. Republicans contend the tax cuts will largely be financed by greater economic growth. Should that fail to materialize, they would be financed by growth of the national debt.

When the tax cuts passed, Collins reassured Mainers she already had a pledge from the White House that the payment scheme would not impact funding for Medicare.

Collins told Chuck Todd on Meet the Press in December 2017 she had received "an ironclad commitment that we're not going to see cuts in the Medicaid/Medicare program as a result of this bill."

That same month, by a 91-8 vote, the Senate passed a Collins' amendment to avert any automatic cuts to Medicare.

Still, the attack ads airing in Maine charge she put Medicare and Social Security "in jeopardy."

Collins is not the first Republican to be on the receiving end of that line of attack. In fact, accusations Capitol Hill's legislative sausage-making would put Medicare at risk were also leveled against President Trump.

When The Washington Post fact-checker Glenn Kessler looked into that allegation, however, he dismissed it with four Pinocchios.

"The campaign season has barely begun," Kessler wrote, "but there's little excuse for this line of attack. There is no connection between the tax cut and Trump's proposed Medicare reductions – many of which have bipartisan support."

As Grover Norquist of Americans for Tax Reform tells Newsmax: "The greatest threat to Medicare and Social Security is slow economic growth – such as during the Obama years," adding: "The Republican tax cut strengthened the economy and lengthened the protection of both Social Security and Medicare."

Advertising Analytics reports none of the $1.3 million spent on the Senate race so far has come from Republican sources.

One reason the GOP and Collins are keeping their powder dry: With over 14 months still to go before Election Day, she has yet to officially announce her candidacy for re-election – let alone roll out an ad campaign. She has signaled she intends to run, and is expected to wait until early fall to make an announcement.

That she is one of Democrats' top targets in 2020 hardly comes as a surprise to Collins. During the intense battle over the Kavanaugh confirmation, two progressive groups crowdsourced a national fundraising campaign to raise money for her opponent.

The group let it be known before the confirmation vote that the $4 million they raised would only be donated to Collins' opponent if she approved Kavanaugh's nomination. Vote against him, they said, and the funds would simply be returned to the donors.

Based on the senator's reaction, the attempt at intimidation backfired badly.

"I consider this quid pro quo fundraising to be the equivalent of an attempt to bribe me," she said at the time, adding: "This effort will not influence my vote at all."

Still, with Democrats determined to take back the Senate and return Republicans to the minority, Collins expects a tough race. With the $4 million in play, and a massive attack-ad campaign already underway, it is already clear her opponent will have plenty of money.

The other side of that equation: Collins has turned in some record fundraising numbers lately. She raised $1.9 million in the fourth quarter of last year, and another $1.5 million through the first three months of 2019. So, it is clear her campaign also will be well funded.

Whether anti-Collins ads this far in advance of the election will drive up her negatives with voters remains to be seen. The results of Collins' 2014 re-election bid would suggest Mainers are rather fond of their senior senator – she carried nearly 70% of the vote.

Collins is seen as one of the few bipartisan figures in Congress willing or able to work across the aisle. In fact, she sided with Democrats in July 2017 to halt the "skinny repeal" of the Affordable Care Act. As a four-term senator, she enjoys more seniority than any senator from Maine has enjoyed in the past seven decades.

State and local media seem largely indifferent the attack ads against Collins funded by anonymous donors, and appear to be looking the other way.

Tim Graham, the executive editor of Newsbusters.org and co-author of "Unmasked: Big Media's War Against Trump," tells Newsmax an obvious double standard is at work: Undisclosed donors to conservative causes are seen as probably nefarious, while the media tends to look the other way when dark money – cash from donors who remain anonymous – flows in to activist groups on the left.

Notes Graham: "There is a tremendous irony in the liberal media that they can ardently advocate for 'campaign finance reform' and against 'dark money,' and yet be terrible at covering leftist 'dark money.'"

So far, only a few Maine journalists, specifically Steve Mistler of MainePublic.org and Kevin Miller of the Portland Press Herald, have taken notice of the shadowy ad campaign trying to brand Collins as a Medicare foe.

Graham is hardly surprised, however.

"The media-elite and media-adjacent 'fact checkers,'" he says, "have a habit of critiquing conservatives/Republicans at a much higher rate than Democrats, with a more combative tone and harsher 'Pinocchio/Pants on Fire' ratings.

"It's commendable that The Washington Post would notice the lies about Medicare cuts," he remarks. "But even they will probably have to be goaded into connecting that earlier critique to the current anti-Collins commercials."