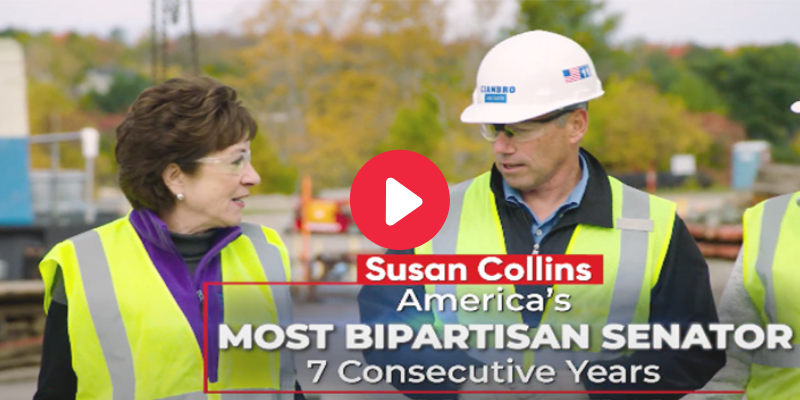 BANGOR, MAINE -- Collins for Senator released a new ad featuring hardworking Mainers whose jobs were saved as a result of the Paycheck Protection Act (PPP) which was authored by Senator Susan Collins.

Just this week, the Washington Post reported that the PPP “is being widely hailed as one of the most successful pieces of the congressional response to the economic crisis brought on by the coronavirus.”  According to a survey by the U.S. Census Bureau, nearly 3 out of 4 Maine small businesses have received forgivable PPP loans, which is higher than the national average, and it has helped support roughly 200,000 Maine jobs at small businesses like Cyndi’s Dockside Restaurant and Poland Spring Resort.  Owner Cyndi Robbins told Senator Collins, “I want you to know that you and Congress saved a small business… the PPP has given us the ability to regroup… each week, since we received the PPP, we have paid the staff payroll and the tips that the employees would have made if we were open normally.  Now, except for two employees that were part-time and had other jobs, everyone else is back to work. Thank you!”

Also this week, Senator Collins participated in a hearing of the Senate Small Business Committee where she questioned the Treasury Secretary whether he could support allowing some small businesses, especially those in the hard-hit tourism industry, to apply for a second round of forgivable funding.  There is approximately $130 billion in unused PPP funds still available to help small businesses still struggling with state regulations as the economy slowly reopens.   At that hearing, Senator Collins also read a letter that she received from a Portland restaurant owner thanking her for her extraordinary work and wrote: “The PPP is the only thing that has kept us in business up to this point…There’s no question that without the PPP, we would not be operating right now and would have furloughed all of our staff.”

Susan brings people together to get the job done… (Spencer/Bridgton)

Susan has been ranked America’s most bipartisan Senator… (Theresa/Scarborough)