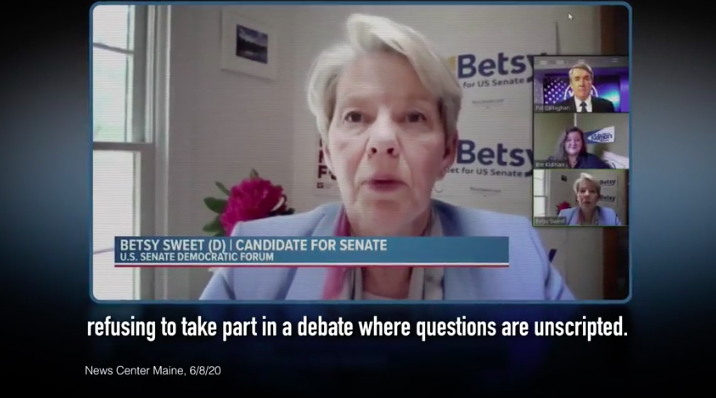 Bangor, Maine -- Democrat Senate candidate Sara Gideon is missing in action.  But don’t take just our word for it.

A new ad from the Collins for Senator campaign features one of the House Speaker’s primary opponents, Betsy Sweet, criticizing Gideon for skipping the first statewide, televised primary debate.

Maine faces an economic and health crisis and Gideon has done nothing in her role as Speaker of the House to help Mainers survive and recover since she adjourned the legislature on March 14.  In fact, today marks THREE MONTHS - 90 DAYS - since Gideon adjourned the Legislature. And according to the AP, Gideon may not convene the Legislature for months more!

Gideon’s primary opponents are clearly getting fed up with the disappearing act. Gideon skipped a statewide televised debate on NewsCenter Maine last week, leading to Betsy Sweet blasting Gideon for her “duck the press, duck debates” strategy.  No one should be surprised, however.  Gideon's ubiquitous absence is in keeping with Senate Democratic Leader Chuck Schumer's "windowless basement" strategy, keeping Gideon and other candidates sequestered from the public eye, protecting them from voter scrutiny and potential missteps, and focusing them instead on fundraising phone calls, and carefully produced television ads.

We understand her Democratic opponents’ frustration. Mainers are hurting and Gideon isn’t lifting a finger to help and she refuses to make herself available to answer unscripted questions from journalists.  Contrast that with Senator Collins, whose record of effective leadership during this pandemic is crystal clear.

During this economic crisis, Sara Gideon shut down Maine’s Legislature and did nothing

(Betsy Sweet) I’m sorry Sara’s not here tonight, refusing to take part in a debate where questions are unscripted

It’s an old model of running for office

Duck the press, duck debates, sit in your room, dial for money from out-of-state interests in order to run sappy TV ads.

While Gideon does nothing, Susan Collins gets results for Maine