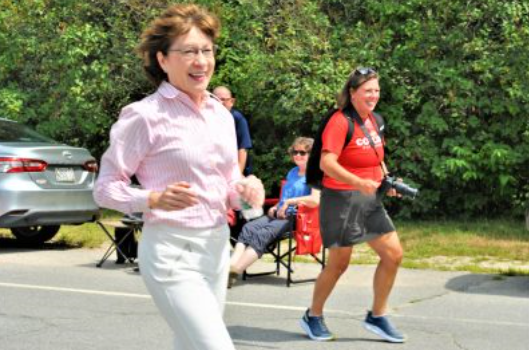 Annual Buxton event packs in a variety of activities

BUXTON — There was a little something for everyone at the Dorcas Fest Community Day, held in the Tory Hill section of Buxton on Saturday.

The community festival is an annual event of The Dorcas Society of Buxton and Hollis, a nonprofit group founded in 1897 by author and Hollis resident Kate Douglas Wiggin that is committed to doing good works in the community.

“It was wonderful seeing hundreds of people from Buxton and the surrounding towns who are so proud of their community,” said Collins in a prepared statement.

A number of vendors had set up on the lawn of Tory Hill Church, and many people browsed the displays of gently-used items, handcrafted products and fresh baked goods.

Several of the festivities were held on the grounds of the Brewster mansion, named for Dr. Royal Brewster, for whom the mansion was built in 1805.

Sandy and Beverly Atkinson who bought the Brewster Mansion in the 1990s, opened the property for “cars and coffee,” a morning car show that attracted nearly 70 classic cars, relay races, a balloon toss and other children’s games with the Recreation Department, and an evening concert by The Mallet Brothers Band.

Those interested were welcome to stroll the manicured lawn and check out the lovingly tended gardens.

The Atkinsons also opened up their barn, where guests could take a look at their curated collection of antiques and collectibles including a rare coin-operated Wurlitzer organ, carousel horses, books and clothing.

There are also some family mementos including a high school emblem cardigan that Beverly said her husband wore in the 1950s, and a pair of cleats her son wore to play baseball.

“He was a pitcher, so they’re scuffed,” she said, pointing to the toe of the shoes.

Beverly chatted with visitors, carrying a basket of small stuffed animals she was handing out to the children. She said she and her husband enjoy opening up their property for the festival and have been happy to see Dorcas Fest grow over the years.

Local photographer Peter Mills, who was taking pictures for the festival said the Atkinson opening up of their grounds was indicative of their generosity.

“They are all about community,” said Mills.

The festival is the largest event the Dorcas Society of Buxton and Hollis hosts. Other annual events the group hosts include an Easter egg hunt and a Christmas-time production of the Wiggin play “The Old Peabody Pew.”

There are many Dorcas societies around the world, said Dorcas Society of Buxton and Hollis member Jane McCarthy. The group gets its name from Dorcas, a woman in the bible who was noted for her charitable work.

The Dorcas Society of Buxton and Hollis contributes to local libraries, a toy drive, food pantries, Wreaths Across America, a heating assistance program and other charitable efforts.

“The money we raise goes back to the community,” said McCarthy.