Here are 7 things you need to know about Sara Gideon

1. Speaker Gideon has completely failed to address the COVID crisis as Speaker of the Maine House. She adjourned the Maine House almost 200 days ago and has done nothing to fight COVID’s impact on our economy or health care system since. She even “personally pledged” to “immediately” provide assistance to Maine’s small businesses on April 28...but hasn’t, and she has failed to negotiate a bipartisan compromise to bring the Legislature back into session. 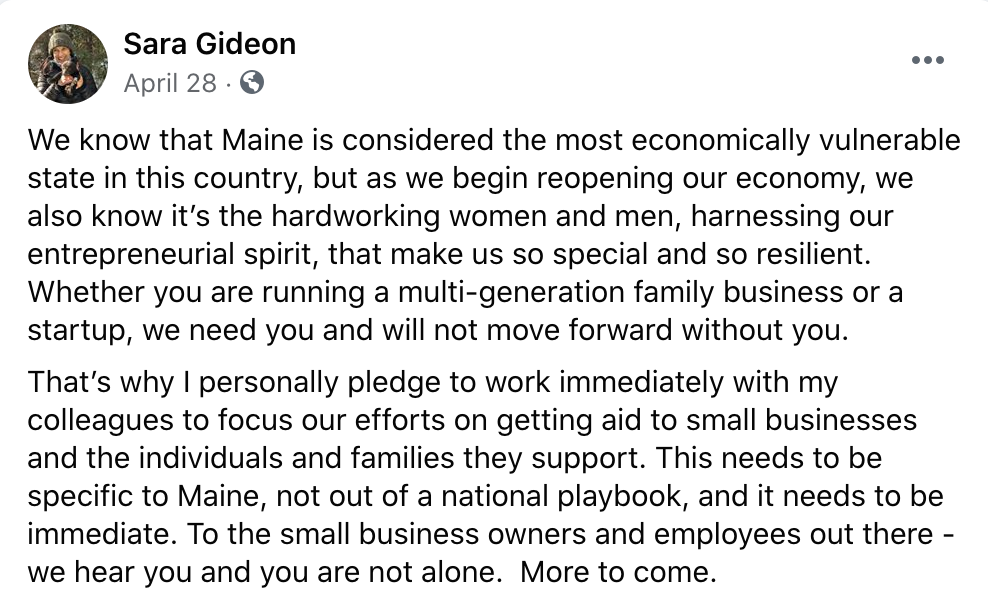 2. Speaker Gideon is unprepared for the office she’s seeking. Gideon stumbles when asked questions that her DC handlers didn’t prepare her for, as we saw when she couldn’t offer a position on Chief Justice Roberts in a recent debate.

3. Speaker Gideon is heavily funded by and supported by the Defund the Police movement. Her primary coalition of supporters, including Planned Parenthood, NARAL, Sierra Club, NextGen, and DC-funded dark money groups like Mainers for Accountable Leadership are dumping millions of dollars and waves of out-of-state staffers into Maine for Gideon.

5. Speaker Gideon is pushing a far-left policy agenda out of step with the needs of Mainers. She supports government-run health care, proposed a new gas and heating oil tax, has a tax plan that would hike taxes on 90% of Maine taxpayers, and has supported higher taxes and fees 86 times in recent years.

6. Speaker Gideon’s campaign is a creature of Washington. Her campaign is primarily funded and staffed by out-of-state operatives.

7. Speaker Gideon was born to a wealthy family in East Greenwich, the wealthiest town in Rhode Island, moved to Maine in 2004, and immediately started to run for public office. According to a new Lewiston Sun Journal article, Gideon’s sister wrote a memoir that includes some illuminating anecdotes about Gideon.