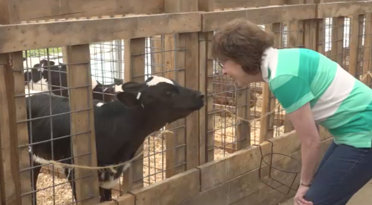 It all started after 9th generation farmer Jake Bragg invited her when he met with her in Washington D.C. about a year ago.

"We wanted to just show her how integral organic farming is to Maine because there's 28% of the dairy farms in Maine that are organic, and it's a sustainable way of farming," said Bragg, whose parents own Rainbow Valley. "As you can see, the cows behind me, they love pasture. It's easier on their feet, they love the grasses, and it's free feed."

"I've been a strong supporter of the Farm Bill," said Collins. "I was able to secure research dollars for organic farming, and I'm also working with the Association and the Bragg family on a rule that the Department of Agriculture is about to issue."

That rule is to make sure all states are following the national organic standards the same way.

"We all want to see one consistent standard that everyone follows," said Organic Valley Government Relations Manager Adam Warthesen. "And so, part of the aim today was to talk about how does that happen on organic dairy, and what are some of the progress that we can make to make sure that everyone's following the same set of guidelines and the same rules."