But, as we told you yesterday, a senior staffer for Sara Gideon tweeted specific advertising strategy… and today, a Super PAC supporting Gideon followed that strategy to a tee. 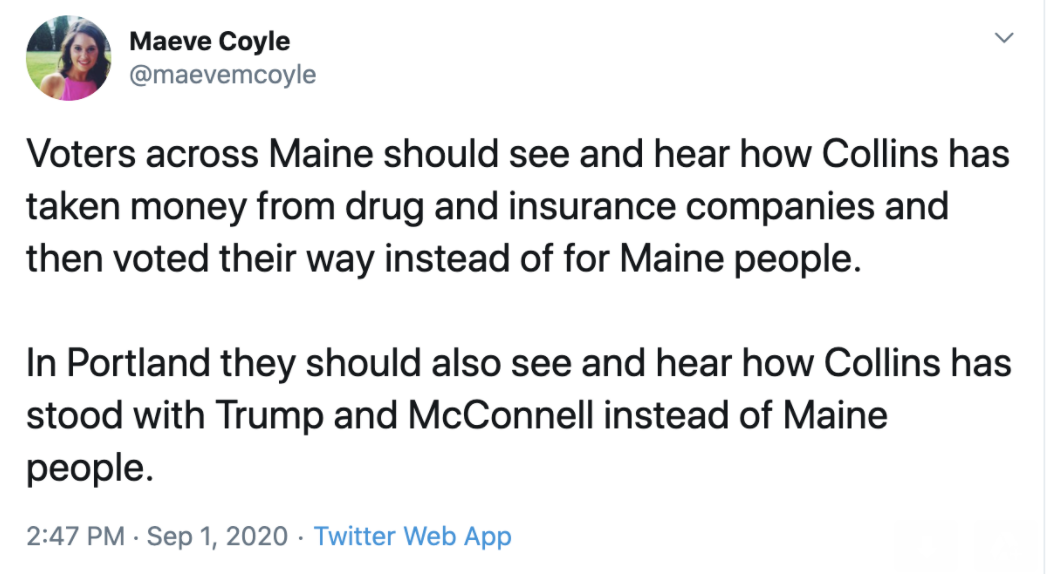 The Schumer ads including images of President Trump appeared in the Portland TV market, just as Coyle’s tweet directed:

But the Schumer ads about drug companies  -- with no trace of President Trump -- did not appear in Portland, and instead ran "across Maine"….just like the tweet directed:

Similar (but less specific) coordination was the subject of a Federal Elections Commission complaint filed by the Campaign Legal Center (CLC) against Democratic presidential candidate Pete Buttigieg earlier this year. (Colby College's Anthony Corrado sits on the Board of CLC).

"On February 5, 2020, a senior Buttigieg campaign official tweeted, “Pete’s military experience and closing message from Iowa work everywhere especially in Nevada where it’s critical they see this on the air through the caucus.”

One week later, VoteVets—the only super PAC supporting Buttigieg’s campaign at the time, and the only group that could reasonably be expected to follow through on the “critical” request—aired over $639,000 in broadcast ads in Nevada, slated to run through the caucus, touting “Pete’s military experience” and highlighting the theme of unity that Buttigieg had used as his “closing message” in the final stretch of the Iowa caucus."

It's noteworthy that the CLC complaint did not have the precise substantiation of correlation that the Gideon situation has.

A one day delay between the tweet and this specific, market segmented ad strategy should raise serious eyebrows about the Gideon campaign's adherence to FEC coordination rules.